How to draw a Union Jack 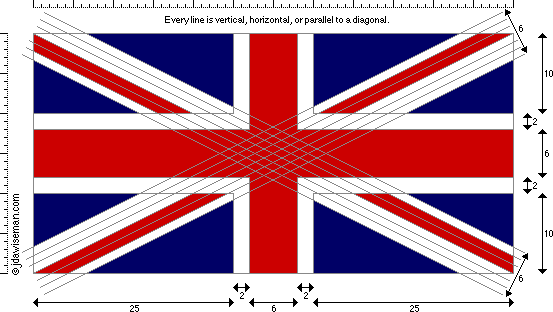 The flag of the United Kingdom, the Union Jack, is a superposition of the flags of Saint George (for England), Saint Andrew (for Scotland) and Saint Patrick (for Ireland). This superposition is quite intricate, and often drawn incorrectly.

Email ThisBlogThis!Share to TwitterShare to FacebookShare to Pinterest
Labels: info

Big brother's cousin over the seas

..Binney believes that the agency now stores copies of all e-mails transmitted in America... the N.S.A. has built enormous electronic-storage facilities in Texas and Utah. Binney says that an N.S.A. e-mail database can be searched ... in the manner of Google. ... “General Hayden reassured everyone that the N.S.A. didn’t put out dragnets, and that was true. It had no need—it was getting every fish in the sea.”

The lesson? Beware when those in authority speak in metaphors.

To me the "dictionary selection after the manner of google" is a dragnet, and to most people it's the sort of thing they were worried about, so when an authority denies a specific behaviour by means of a metaphor, try to see what is being hidden and thus perhaps admitted to.

Charges Against the N.S.A.’s Thomas Drake
Drake, a former senior executive at the National Security Agency, faces some of the gravest charges that can be brought against an American citizen.
Posted by Sam Liddicott at 17:15 No comments:

Email ThisBlogThis!Share to TwitterShare to FacebookShare to Pinterest
Labels: overlords

This analysis highlights the difference between good intentions and good actions.


Oxfam's latest campaign, "Grow", seems so lovely and cuddly that to criticise it is almost like torturing puppies. What could be wrong with trying to feed the hungry and thus make the world a better place? Alas, if wishes were kings we could all be monarchs for the day and what's wrong with the campaign is not the initial wish but the list of damn fool things it intends to do.

Posted by Sam Liddicott at 23:23 No comments:

What makes the improbable valuable

When what makes a thing improbable also makes it valuable, the description "unlikely" is not helpful. Singular claims must be examined independently. That which is not normal makes life meaningful and worthwhile. Here are two good uses of the word "absolutely" to describe some singular events. My favourite paragraph: "How the Atonement was wrought we do not know. No mortal watched as evil turned away and hid in shame"