I Speak in Kingsley

I walked up and down
through the town, and round and round
and wondered what to say and why to say it

Then I purposed with an air
of sureness, and took care,
That when I did it, saying said it, I would say it.

Unfortunately it didn't work out like that
because I stubbed my toe
And said some other things instead,
which didn't really go,
I was quite embarrassed and my mother, she was too
And I really couldn't think of what I ought to do-
to break the silence that I started, so:

I screamed:
"Oh look, ohh look behind you!"
So they did, and when they had,
I took off running down the street
the pit pat padding of my feet
was all I heard besides my panting
'till I heard a train man chanting
"All aboard for Kingsley Station, time to go, the train is waiting"

So I climbed in and took a seat, nonchalantly trying not to attract attention;
which I can do quite well
(unless I stub my toe)
and the train started to go.

So I waited, looking out of the window as we went,
my foot going clackety clack,
my mind keeping time with the train,
and it started to rain

I was finally starting to calm down when we came to the next station,
and who do you think was waiting
with my mother
to get on the train?

I considered my solutions,
and came to my conclusion,
and operating smoothly I got into the toilet compartment,
waited till we started, pulled the cord and the alarm went -
ringing
"Stop the train" the cry went up,
the brakeman working frantically, a scraping screaming sound,

and stop we did! Stopped dead on the tracks
Nobody knew why so after a while we went again,
with a chuff chuff sound, and I carefully jumped out
landing softly on the ground, but as I stood and rose to my height,
past me went a window, and there, pressed to the glass,
were the faces of my mother and her three friends 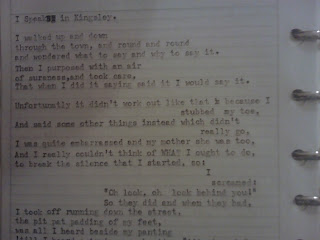 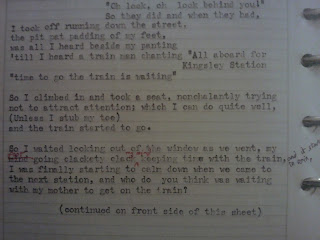 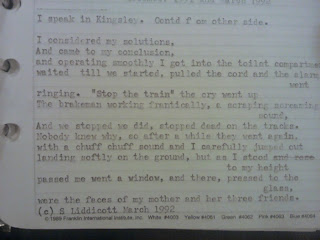 I wondered as I wandered
what was what,
and who was where,
And I thought a little more
as I wandered up the stair
and 'cos I wasn't looking
I slipped on three pairs of roller blades and two yin and a yang,
I bumped my pore head     and I trod on my hand
I didn't much like it, I shan't say what I said
But that should explain why I'm sitting in bed.

I should be out working
it's true that I'm not,
when I trod on my hand
I'm not sure what I got,
But it got all twisted
and pulled here and there,
which all should explain
why not to play on the stair 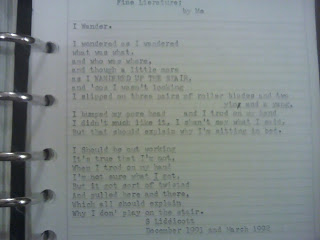 Posted by Sam Liddicott at 20:20 No comments:

Brexit: All stick and no carrot

"Travel," as Johnny Morris said in his Around the World in 25 Years, "not only, broadens the mind, but stretches it out and rolls it up like a chelsea bun until you don't know who you are, or what you are."

It also gives you jet lag, which means plenty of time to think about what you are too tired to write; until at last you reduce it so such simple points you have to write them.

In the matter of Brexit, remainers still have it so backwards that they keep shooting chunks out of their own foot under the delusion that it is someone else's foot. Their attempts to convert always lead the other way.

If we want home rule and self sovereignty then they offer even more sovereignty (over other countries) via the EU. Apparently sovereignty can be pooled, and in the EU there should be enough to satisfy our thirst for it.

If we want Britain to be ruled by the British, it isn't because we are worried about the race or nationality of the parliament that implements the final legislation to enact the will of the EU commission; and so no, we aren't easily satisfied that our own elected parliament will have the final say on the form of words used to bind us.

We want to be ruled by our own countrymen because they are like us, and they live within marching distance for an angry mob with pitchforks and flaming torches. It keeps them more honest.

But what about unity? What about international cooperation? What about friends and allies? We can't expect other European nations to co-operate in a true spirit of international friendship if we don't pay the EU to permit it.

Think of the hungry golden curly haired European children whose parents pharmaceutical businesses are failing because the EU won't permit the sale of life saving medicines to the suffering sick British golden curly haired children, and all because we wouldn't pay the yearly fee! Wouldn't we pay any amount of money to save those lives? (You can almost see an accounting with an adding machine).

But that argument hardly deserves an answer.; it portrays an EU that can grant nothing but the removal of barriers which it will otherwise enforce.

Then come the veiled threats: Perhaps we wish to avoid war? They suggest: think of all the wars in Europe to defend ourselves from foreign rule (since world war two) that the EU has avoided through the simple expedience of having member states surrender (I mean pool) national sovereignty in advance without need for battle!

Except for the EU army that is suddenly needed...

Their problem is that EU Membership is all they have as carrot, and it having been rejected, they having nothing better to offer but stick.

In fact the EU is in a very hard and woody carrot, in fact pretty much all stick anyway, but it's all they have.

So in what way are the repeatedly blasting their own foot?

The EU can only be made to look attractive in comparison to it's worst parts, and so remainers actually select and identify the worst parts of the EU and present them as some kind of potential exit deal or indefinite transition arrangement, along with larger ongoing fees.

The basis for this is their strategy to argue that if we can't get unity on what the initial leave arrangement should be, we should stay by default. But this is backwards, as I have written before. Our membership of the EU was never assented to and is illegitimate, and so it rather goes like this: if we can't agree on a way to stay, we should leave. It is the remain terms that need unity for us to remain; we already have a mandate to leave without compromise.

But, under their delusion, and in an effort to make remain look attractive, they start drawing attention to the woodier parts of their carrot in the form of various horror bad deals.

If we don't stay, we might leave but remain as part of the customs union (for the good of the economy, so we don't get thrown into the streets and starve). In the customs union we will have much of the obligations and duties but none of the voice - a condition that has been referred to as a vassal state. But the actual choice is to leave, entirely, in comparison to which their vassal-state deal looks absolutely stupid.

"How terrible, " we say, "we don't like that deal" (after all, it is a least carroty part of the stick), but they can't work out why we don't follow up with "so let's stay".

So now remainers are almost unaware pointing out the bad parts of the EU, are they close to converting?
Posted by Sam Liddicott at 12:52 No comments: